Music to lull someone to sleep –

Music to draw out the evening –

Sometimes we speed through stories and studies and it is still quite early in the evening.  We have time for longer classical music selections than usual, and we pick livelier than the “lulling to sleep” pieces:

April looks back at March:

We compared two interpretations of the jig,  “The Irish Washerwoman”, inspired by the 17th century English Folk tune, “The Dargason” (Anglo-Saxon word for fairy)(not a river as I first assumed)(but seriously, doesn’t “The Dargason” sound like a river name?) –

– Gustav Holst’s “Fantasia on the Dargason”, composed in 1911 for his “Second Suite for Military Band”.  An excellent VIRTUAL performance by the Sacramento State Symphonic Wind Ensemble from October 2020.

– Leroy Anderson’s “The Irish Washerwoman” from movement one of his “Irish Suite”, first performed in 1947.  Rollicking (we expect no less from Leroy Anderson) – 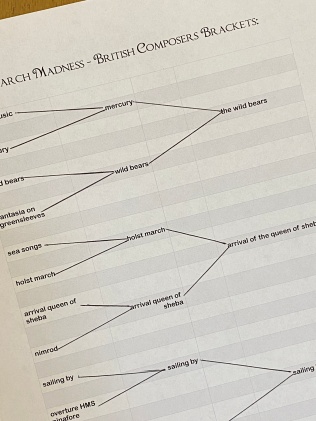 We created our own March Madness Classical Music Brackets and pitted our favorite pieces by British composers (Handel, Holst, Vaughan Williams, Elgar, Binge, Sullivan, Clarke, and Alwyn) against each other.  After 9 grueling rounds, the top thrilling three:

“The Wild Bears”, by Sir Edward Elgar from “The Wand of Youth”, suite II (1908).  No question about this, “The Wild Bears” is my son’s favorite classical music piece.  It has everything – scampering, tiptoeing, abrupt twists and turns, superb use of every instrument in the orchestra, and a smashing conclusion – all packed into 2+ minutes:

“Arrival of the Queen of Sheba”, by George Frederich Handel from his oratorio, “Solomon” (1749).  Don’t miss this short video if you want to see your first THEORBO (a ridiculously large lute-type instrument):

“Sailing By”, by Ronald Binge (1963).  This is the BBC4 Shipping Forecast theme, and we love it.  Comfort listening:

Welcome to the best part of my day!
– Jane BH