What was life like for my son’s grandparents, who were teenagers during the Great Depression and young adults during World War II? 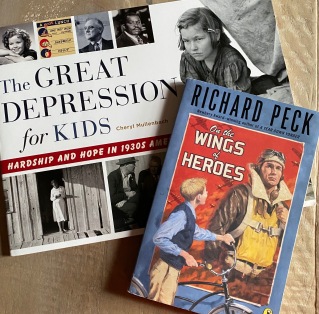 We got a glimpse of the early days of World War II – through Richard Peck’s YA novel, “On the Wings of Heroes”.  Peck’s short chapters seamlessly combine the realities of a nation at war with a middle school student’s realities:

This is a comforting book set during nervous times and a perfect follow up to our study of the Great Depression.

A glimpse at trees and the high seas –

“Trees, a Rooted History” –  Socha and Grajkowski explore 32 tantalizing tree topics and team them with clever, superbly executed illustrations.  Our favorite two-page spreads: prehistoric trees (lots of fern-like leaves), the tallest trees (FYI, the tallest tree in the world:  “Hyperion”, a coast redwood in California), tree houses (why yes, we would like to stay in the treehouse on the grounds of  Amberley Castle in England), and the art of bonsai (who can’t love the sheer art and patience evident in a bonsai tree?).

We concluded our tree unit with a fill-in-the-blank version of the Joyce Kilmer’s poem of 1913, “Trees”.  (This was easy for my son – we have read this poem many times.) 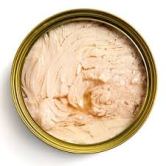 Speaking of trees:  a Farmer Brown story problem – Farmer Brown’s cat, Olive, loves to scamper to the top of the front yard apple tree, but is jittery about the descent.  Smart thinking Farmer Brown has been successful in coaxing Olive down the tree with a fragrant offering of tuna.  If a can of tuna costs $4 and Farmer Brown needs to lure Olive down around 7 times a month, will $400 be enough to cover the cost of Olive’s “rescue tuna” this year?  (answer at bottom of post)

“Professor Astro Cat’s Deep-Sea Voyage” – YAY! We have the new book by Dr. Dominic Walliman and Ben Newman!  My son and I have loved every book by this team (especially “Professor Astro Cat’s Frontiers of Space”).  And once again, THIS IS WHAT A LEARNING EXPERIENCE SHOULD LOOK LIKE IN BOOK FORM.  We are only half way through, but here is what has grasped our attention so far:

A glance at ants –  If you need to know about ants, may we recommend, “The Life and Times of the Ant”, by Charles Micucci.  It is simply jammed with all sorts of stuff we budding ant scholars did not know previously, like:

Classical Music Time – we created a soundtrack for busy ants: