We are in A+ Book territory!  Sometimes we’re lucky and every book on the nightly agenda is so first-rate that we can’t wait to get started.  Do we think every book is dandy?  Ha.  Frankly, about half of the books we start do NOT get finished.  If they are dull or poorly edited we give them a quiet farewell, and sort of feel bad about tossing them in the give-away box for the next charity drive.  But this week, we are in A+ Book Territory! 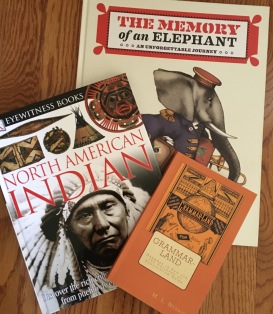 A+ for “Grammar-Land” – what an entertaining book we have found in “Grammar-Land” written by M.L. Nesbitt in – GET THIS – 1877! (never fear, reprinted/available from Amazon).  M.L. Nesbitt must have had so much fun writing this, and as we get caught up in the grammar court room cleverness, we are being drilled over and over with grammar rules. We are getting smarter! Oh my gosh, I was so nervous about last night’s topic – we were tackling “the nominative case” – which ended up being ridiculously easy.  I have reviewed many supposedly “fun” grammar books, which are decidedly NOT.  This one: A+.

A+ for the “DK Eyewitness Book: North American Indian” – we continue our Native North American unit and this book is providing a decent introduction for our survey.  We have admired the sleek design of birch bark canoes, we have learned a bit about the Iroquois League (5 tribes that worked together, under the guidance of a council made up of men – who were chosen by elder tribe WOMEN!!!), and last night, we read through a most interesting mini sketch of Tecumseh.  Two thumbs up for this reference (A+)!

A+ for “The Memory of an Elephant” – We are enjoying this quirky book about elephants by Sophie Strady, gloriously illustrated by Jean-Francois Martin, so the news of the week – the announcement by Ringling Brothers of the imminent close of their circus – caught our attention.  So much to talk about – the skilled performers, the death-defying acts, circus snacks, circus parades, circus music, and then a thoughtful discussion about the realities of “freak exhibits” and circus animals (including a mention about PETA and their role in forcing the circus to retire their elephants).  This book: conversation provoker!  A+!

Story Problem – Too many books in Farmer Brown’s library – Farmer Brown has run out of storage room, so he has decided clean out his book shelves.  He has found 40 hardcover books and 50 paperback books to donate to a charity. He has determined that the worth of each hardcover book is $7, and the worth of each paperback is $3.  How much will Farmer Brown be able to tell his CPA that he has donated in books?  My son did the computation in his head:
A) $90      B) $430      C) $730      D) $900 (answer at bottom of post)

Circus Music Classics – Even though the Ringling Brothers Circus is about to be a thing of the past, we will always love these attention grabbing compositions:

Entry of the Gladiators – composed in 1897 by Julius Fucik.  As I wrote in August 2015, Fucik had quite an interest in the Roman Empire.  He did NOT intend for this composition to be used as a circus SCREAMER (how can you not love this term?????) (a “screamer” is an invigorating circus march).  Is this not THE music that should be blaring in elementary school halls on the first day of school?

Sabre Dance – Aram Khachaturian’s Sabre Dance, composed in 1942, is the definitive go-to music for any and all knife throwing attractions.  We found a simply outstanding performance of this edge-of-your-seat music (and we would do anything to be part of this percussion section):

The Daring Young Man on the Flying Trapeze – composed by Lyle and Lee in 1867 to glorify Jules Leotard, a French acrobat who developed the art of the trapeze AND AS IF THAT WEREN’T ENOUGH, he invented the 1-piece form-fitting knitted gym suit: the leotard.  An extremely popular song for decades! (But I guess not in this decade – last weekend, I was at a leadership workshop, singing with a group of 80 bright collegians, and I was stunned to discover that NOT A ONE OF THEM was familiar with the circus music classics.  REALLY?  NOT ON MY WATCH – I made them listen over and over to “The Daring Young Man on the Flying Trapeze”)