Back to Kansas – Last night we finished reading “The Wonderful Wizard of Oz”, but we weren’t ready to put the book away until we discussed the concept of IMAGINATION.  We defined imagination (forming mental images of things not perceived by the senses) (then we had to discuss the definition) and we acknowledged the relentless imagination of author L. Frank Baum:  winged monkeys, a magical golden cap, a tin man, a country of movable china figurines, Winkies, Munchkins, Quadlings, and on and on.  We thought Baum’s imagination well matched with the imagination of contemporary illustrator, Olimpia Zagnoli. Enjoying all aspects of this book was such a worthy use of our time.

Math Surprise – A few nights ago my son had to multiply 9 x 16 and I was stunned by the speed with which he arrived at the answer.  Like in 0 seconds.  Was this a fluke?  Was my hand guiding his answer?  Last night, I set up multiplication and division problems that were difficult enough for me to have to figure out ahead of time.  I used a multiple-choice format on his iPad, so I would not be directing his hand.  He again answered swiftly and correctly, calculating in his head.  The bummer here is that if he is a bright as I think he is, this will place me as the WEAKEST INTELLECTUAL LINK in our family. DRAT.

Poems of Tribute – last night we acknowledged the 7th anniversary of my father (my son’s grandfather) passing on, by reading a few poems that honored this really neat man. 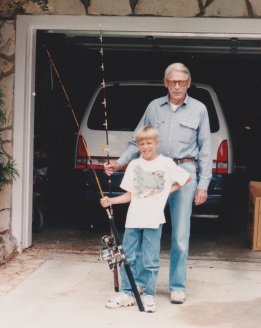 – the kind of grandfather that would take a kid fishing –

Music of Tribute – we selected melodies that would have pleased my son’s grandfather .