We want textbooks that make us pay attention  – 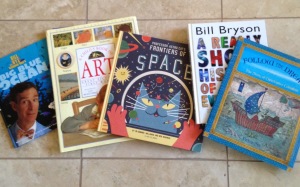 We want textbooks that we cannot wait to open each night.  Books like these:

Last night’s music program celebrated TEA TIME. We learned about theme and variation and the concept of orchestration by focusing upon the classic American sweetheart melody, “Tea for Two”.