Wanderlust –
“You don’t even know where I’m going.”
“I don’t care. I’d like to go anywhere.”
― John Steinbeck, “Travels with Charley:  In Search of America”

Wanderlust –
“All that is gold does not glitter,
Not all those who wander are lost.”
― J.R.R. Tolkien, “The Fellowship of the Ring”

Wanderlust –
“The gene itself, which is identified as DRD4-7R, has been dubbed the “wanderlust gene,” because of its correlation with increased levels of curiosity and restlessness.”
― Dan Scotti, March 2015 edition of Elite Daily

and more Wanderlust – The Lewis and Clark Expedition – My son and I agree that there had to be a heaping helping of DRD4-7R present among the army volunteers assembled for President Thomas Jefferson’s “Corps of Discovery Expedition” (otherwise known as the “Lewis and Clark Expedition”).  We are reading Roland Smith’s “The Captain’s Dog”.  Each chapter begins with an entry from Captain Meriwether Lewis’s journal and the remainder of the chapter is told from the perspective of Lewis’s dog, Seaman.  We happily open this book up every night and use the included map to follow the arduous journey through the Louisiana Purchase territory and Oregon Country.  New vocab/concepts:  court marshal  –  desertion  –  forts  –  fur trappers  –  grizzly bears  –  keelboats  –  parley  –  pirogue  –  portage  –  privates  –  river currents 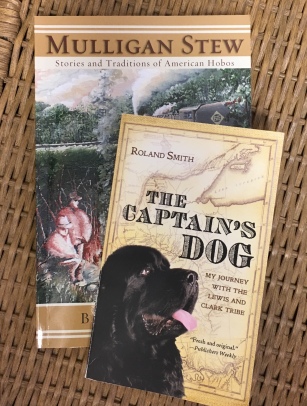 and more Wanderlust – All things Hobo – Hello relentless traveler:  lots of DRD4-7R going on here.  My son and I have learned that a hobo is a continually traveling worker, and the traveling is done by means of a “free” ride on a train.  We are halfway into Barbara Hacha’s comprehensive resource, “Mulligan Stew”.  Just ask us about hobo signs, symbols, carved nickels, bindles, and the dangers of riding the rails.  We’ve read through “Tourist Union 63”, an (excellent) ethical code of behavior chartered by 63 hobos in 1889.  We’ve read about the National Hobo Convention, held annually in Britt, Iowa since 1900.  We’ve read about hobo funerals (sidebar: there is actually a marked gravesite in the hobo section of the Britt cemetery to honor “The Unknown Hobo”).

– Stop the presses – a few weeks back, someone asked me a question that stopped me in my tracks: Could my son read?  Whoa.  I thought so, but how could I have overlooked that?  So I have added something into our STORIES AND STUDIES routine:  a VERY SHORT story with a few follow up questions.  I remain silent, but I do help my son run his index finger under each line of text.  Then he answers the questions.  Is he reading?  YES!!!!! PHEW!!!!!  He has now read about:

– Current fiction reading – Gary Schmidt’s “Pay attention Carter Jones”.  We pretty much always enjoy a Gary Schmidt book, but this one is a little daunting.  Premise is adorable – a family is bequeathed the services of a British butler.  But (here is the “but”):  the butler is intent upon teaching the family’s son the British game with the most bewildering set of rules and traditions:  CRICKET.  Every night when I pick up the book I think, oh my gosh, what did we learn last night and is my son picking up any of this?  Still, he is not pushing the book away, and if you look beyond the confusing cricket component, the dialog is fun reading.

– and who doesn’t love a Venn Diagram?  Sets, unions, intersections:  what’s not to like?  My son is FOCUSED!

A Farmer Brown story problem – Farmer Brown and his farm hands have invited just about everyone they know to a Labor Day campfire!  Farmer Brown has purchased loads of s’more fixings:  marshmallows, chocolate bars, and graham crackers, and the hands have prepared roasting skewers for the marshmallows. The ranch has 4 campfire pits, and each can accommodate 8 marshmallow roasters at a time.  It takes 5 minutes of careful tending to warm a marshmallow to a perfect golden brown.  If 60 friends show up to the s’more fest, how long will it take for everyone to roast a marshmallow for their first s’more of the evening? (answer at bottom of post)

The Big Rock Candy Mountain – this song about a mythical hobo heaven (complete with “cigarette trees”, oh dear), was first recorded by Harry McClintock in 1928, and has been sung at hobo funerals.   My son and I listened to the original McClintock recording:

Ashokan Farewell – composed in 1982 by American folk musician, Jay Ungar.  From the very first bar, the piece captures the sense of loss, and yet, as each additional instrument joins in, we also feel surrounded by the warmth and camaraderie of more and more friends –

Song of the Riverman, from “The American Scene” – even though this is the song of the riverman, my son and I clearly hear the smooth rhythm of the rails.  Composed by William Grant Still in 1957, the melody conveys strength, wistfulness, loneliness and a bit of danger.  The somberness is so right for this memorial service –