We plow through so many poorly edited books (case in point: the North American Birds book that had a chapter entitled “Finches” in which there was no mention of finches in said chapter), or stupefyingly boring books (case in point: the recent purchase of a most disappointing volume on the history of yodeling), so when we come across books such as we’ve been reading these past weeks, I gush.  Sorry.  Not sorry. 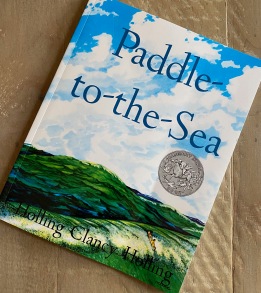 Paddle-to-the-Sea – this book is so A++++.  Written and illustrated in 1941 by Holling Clancy Holling, and selected as a Caldecott Honor Book in 1942.  This soothing reading is:

For us, “Paddle-to-the-Sea” was one almost poetic page per night, accompanied by detailed illustrations, to help us follow the journey of a small hand-carved wooden canoe, complete with hand-carved wooden passenger, as it traveled from a river in Canada through the Great Lakes and eventually on to the Atlantic Ocean.  The 4 year voyage concludes in a most satisfying manner (I was sort of weeping).  Excellent, excellent night-time reading.

Dinosaur Atlas –  a spectacular, though slightly unwieldy effort (it is a large book whose large pages unfold making an even larger book) from Lonely Planet Kids.  This book is FILLED with late-breaking dinosaur findings, photos, and deliciously bold graphics.

The Flag Book – another keeper resource from Lonely Planet Kids.  All world flags displayed and analyzed, PLUS flag topics that drew an intrigued look from my son:

The Smithsonian’s History of America in 101 Objects – this is the type of book that makes us more appreciative citizens.  Each short chapter provides background information on a treasured item from the Smithsonian collection, then explains how the Smithsonian came in possession of the object.  First-rate writing.  Since the last post, the items that provoked extensive side conversations between my son and I:

Story Problem:  gushing about Farmer Brown’s newest product – Farmer Brown had such luck with his cucumber crop this year that he has gone into pickle production.  Using his grandmother’s recipe, he has made jars and jars and jars of dill pickles.  He is not only selling them at his road-side stand, but a national food catalog has made a substantial purchase.

– If Farmer Brown slices 2 cloves of garlic into each jar of his extremely popular dill pickles, and there are approximately 10 cloves in a head of garlic, and he has filled 12 dozen jars, how many heads of garlic were needed?

Speaking of story problems!  Coming semi-soon! –  A booklet that will include 100 story problems from this blog.  Illustrations are finished!  This will be available from this website  before Christmas.  STAY TUNED.

Classical Music we gush over –

About 4 times a week, I make a list of 10 classical music pieces and have my son select the three we are going to listen to that evening.  If one of the following is on the list, it ALWAYS gets picked. I would estimate that we have listened to each of these no less than 400 times –