Are we Ancient Egypt experts yet?   My son and I are mid-way through another Ken Jennings’ Junior Genius book – this one on “ANCIENT EGYPT”.  Of course, we’ve learned A LOT about pyramids, the Nile River, the 2,000+ gods of ancient Egypt (each with an animal head), sacred bees, bugs, hippos, cats,  but last night was THE BEST:

BECAUSE WE READ ABOUT EMBALMING RITUALS!!! (which we learned were rather like spa days for the deceased).  Pages and pages of unappetizing-yet-can’t-look-away information about removing organs, packing corpses with salt, and wrapping, wrapping, wrapping.  As a surprise bonus, we learned how to make mummy snacks using a tube of dough and hotdogs (awful/awesome/still laughing).

ALSO:  we now know we do not want to encounter THE EYE OF RA in any dark alleyway. 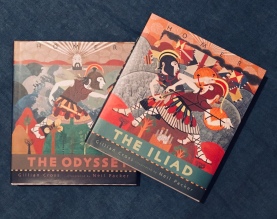 3,000 years old and still spellbinding – Yay Homer! – The Iliad and The Odyssey are the oldest surviving examples of Greek literature and WE are sitting at the edge of our seats enthralled with stories that have enthralled how many generations before us? (generations – discussion topic)   We’ve finished The Odyssey and we’ve started The Iliad.  Last night was just excellent reading:   a fierce battle between Ajax, representing the Greeks, and Hector, representing the Trojans, resulting in a draw (vocab).  The retelling of these stories by Gillian Cross is superb; the complex, really weird illustrations by Neil Packer are perfection.

It was time for another GENERAL KNOWLEDGE QUIZ (based on ANYTHING we have studied in the past) –  My son is enthusiastic and focused whenever I present a quiz – I think he likes chance to reveal his super sharp memory: 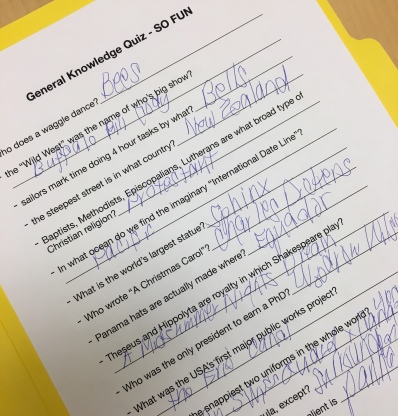 Autumn at the Diner story problem – for the months of October and November, the diner is offering dense, spicy gingerbread cake topped with a thick lemon sauce and whipped cream.  The cake can be ordered by the individual square for $4 – OR – an entire cake may be purchased (for taking home) for $15.  For each month, diner management is projecting to sell 500 squares and 80 cakes.  If the cake is so delicious and in such demand that the sales are double the projections, how much money will the diner have grossed on gingerbread cake sales for the two months?  (answer at bottom of post) 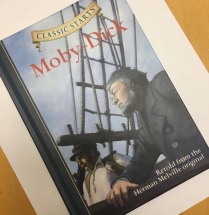 The ancient call to the sea – I have no idea why our nightly book stack always seems to include something that transports us to the high seas.  Must be in the DNA.  Crazy.  This week it is Herman Melville’s Moby-Dick.  We are a few chapters into our abridged version of Moby-Dick – we’ve met Ishmael and Queequeg, and we are liking the pace of the book.  I did compare the abridged version with the Melville’s original, which is way, way, way too wordy for my son.

Controversy on the high seas –

We foolishly thought all sailor type songs came under the umbrella of “sea shanties”.  WELL.  Whoever wrote the Wikipedia entry on Sea Shanties was firm and unwavering:

Now we had to decide if the following were shanties or sea songs:

“Jack’s the Lad” aka “The Sailors’ Hornpipe” – the classic SEA SONG – my son knows it from the Disney cartoon staring Goofy as sailor.  It is documented that Captain Cook ordered his sailors to dance the hornpipe to keep fit:

“Heave Away” – obviously a SHANTY, said to be sung by Indian Ocean whalers of the 1840s.  We became familiar with “Heave Away” from the current Broadway show, “Come From Away”.  If ever there were a song that makes you want to sing along, this is it:

“The Maid of Amsterdam” aka “A’Roving” – a SEA SONG, said to have been sung as early as 1630.  When I attended UCLA in the mid 1970’s, this song was an enthusiastic staple of the Men’s Glee:

“Blow the Man Down” – a well known SHANTY from the 1860’s, used to set the rhythm for hauling: