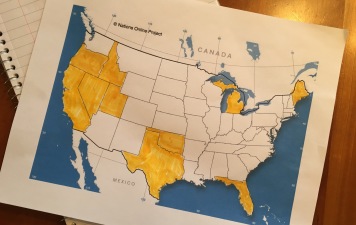 Salients and Peninsulas – We are a fifth of the way through our “Where is That?” states-in-the-USA activity, and my son is learning more than just the location of the states.  Two nights ago we learned about salients – and SURPRISE, we have lived in three of nine salient states:  Texas, Oklahoma, Florida, West Virginia, Connecticut, Idaho, Nebraska, Maryland, and Alaska.  We learned that SALIENT is the correct geographical term for a PANHANDLE (side learning excursion – I had to show my son a real pan handle).  We learned that a panhandle is surrounded by land, and a peninsula (where Big Peaches – star grandmother – lives) is surrounded by water.  We also considered the customary definition of salient (meaning “most important”, “most noticeable”) (vocab).  And my son also learned that panhandling (vocab) has nothing to do with pans or geography.

History is coming alive – Yay! Candace Fleming’s “Presenting Buffalo Bill – The Man who Invented the Wild West” has us on the edge of our seats.  We are currently reading about Will Cody’s pre-teen years in the Kansas territory, where his family was caught in the territory’s “slavery/no slavery” struggle (a shameful blot on the pages of American history – teams of pro-slavery thugs from Missouri terrorized homesteaders who did not want Kansas to be a slavery state).  As Will’s father was an object of death threats from the pro-slavery faction, and was often out of state, in hiding, a very young Will Cody had to provide the primary financial support for his large family.   Working for a shipping company that delivered goods to military posts in Colorado and Utah, Will had his full share of wild west adventures (stampedes, shoot-outs, starvation).  What’s going to happen next???

1)  What is a win-win situation?  How about when a corporation commissions (vocab) artwork that will be accessible to the general public?  We love Lichtenstein’s sculpture, “Tokyo Brushstroke II” commissioned by an architectural firm in Japan, and the crazy-gigantic-five-stories high mural, “Blue Brushstroke” commissioned by The Equitable Life Assurance Society in Manhattan.  The win-win?
– thousands and thousands and thousands of people get to enjoy the artwork
– excellent PR (vocab) for the corporation
– the artist gets paid!
2)  We are never too old to try something new:  Roy Lichtenstein learned to play the saxophone in his mid 60’s! OF COURSE, we were enthusiastic about devoting an evening to a sampling of saxophone sounds: