Our December was as jam packed as everyone else’s, so although I didn’t post, my son and I still gathered nightly for STUDIES AND STORIES.  In the midst of Christmas chaos, we discussed/looked up/whatever: the concept of alliteration – charm bracelets – the Chunnel – poppies – rafts – storks – submarines. Good month.  But now, we are back in business!

One thing leads to another – for some reason, my son and I were reading about the big lenses used in lighthouses…this led me to show him a photo of the lighthouse in the town where I grew up….this led me to tell him about the SS Dominator, an unlucky freighter that sank pretty darn close to our local lighthouse in 1961 (fog issues)…this led us to look at photos of the Dominator, where we noticed: RUST.  So this led us to do a bit of a study on rust.  And fog.  Yay to the freedom of studying in a zigzag fashion.

Last night we began a unit on CATS – all kinds of felines, wild and domesticated (vocab word).   Interesting take-aways from last night: (1) take any type of feline, and the male and female look pretty much alike, EXCEPT one type of cat.  Can you guess?  Answer: LIONS (the male lion looking way different than his female counter-part).  Just the kind of fact that interests us, and (2) the Clouded Leopard: weird weird weird fur pattern.  Doesn’t it look like the design on the back of a tortoise? 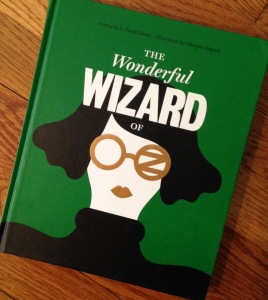 Thought: Baum wrote this as a book for children, so is there a need for so many watered down “children’s” versions? Don’t you think that diluted re-writes are an insult to our children’s minds?

Our Farmer Brown story problem: Farmer Brown’s cousin, Farmer Jimmy, produces maple syrup from the trees on his Vermont farm. He has asked Farmer Brown to sell the syrup for him, so he can concentrate on his syrup making techniques.  Farmer Jimmy is going to pay Farmer Brown 20% of everything sold.  A pint of maple syrup will sell for $8.00.  If Farmer Brown can sell 200 pints, how much money will he earn after he forks over most of the money to his cousin?

Our music theme: “One Thing Leads To Another” – we thought 2014 should go out with a bang and 2015 should enter with a bang…so we selected music that prominently features a booming instrument we want so badly to play – the TIMPANI (kettledrums):